One must admit, Nature can be beautiful, even when it is fearsome.  I videotaped the breezes and wind gusts the morning of our expected hit date by Hurricane Matthew.  The breezes were beautiful and enthralling at this point.  However, they are to be feared.  Reporters and news reporters kept reminding us to “hunker down.”  It was a Category 4.

I had said that I didn’t want this storm to be anything worth writing about.  I recently shared a poem with my classes about Hurricane Katrina and its aftermath.  No one wants to go through that.  I did not want a life or death situation.  I did not get one.  Luckily, the storm downgraded to a category 3.  The worst we had personally was a power outage, and a tin roof from my neighbor’s dog house flying into our backyard.  I survived said power outage by reading with a flashlight.  James Patterson is entertaining no matter what goes on around you.

Some neighborhoods did not fare as well, as old trees were knocked down or uprooted, blocking roads or hitting houses.  This tree and road blockage was surveyed the day after the storm came through.  Residents of the beach area, 20 miles away, had to evacuate, as it became flooded out.  I feel fortunate not to worry about such a thing as flooding, and am very relieved no trees damaged our house.  A tree was felled at the front of our neighborhood but was cleared away by the time I ventured out.

Trees with shallow roots did not stand a chance.  Shown below, is a tree near the front of my neighborhood, already trimmed to make our entrance and exit possible. 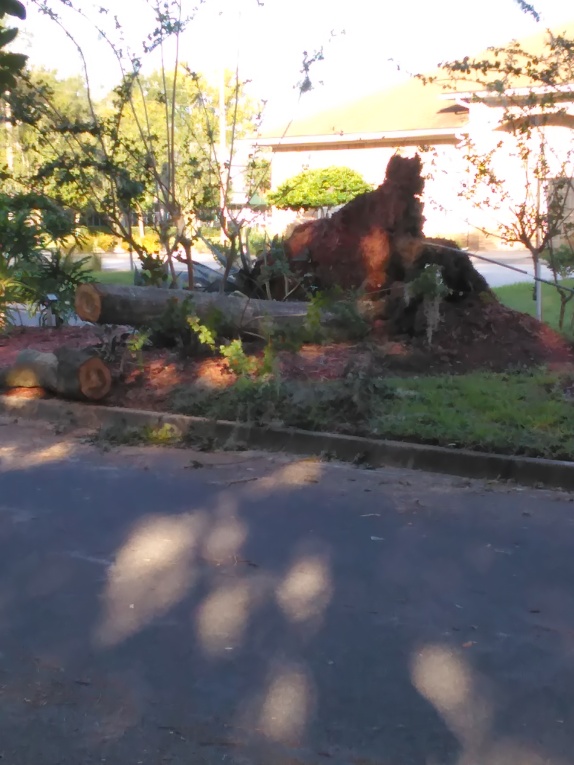 I am heartbroken, however, by the death of a friend of our family, a church member who had taken us under his wing, mentored my son, and helped him get his first job.  It was reported that he tried to cover up his roof during the storm.  It had been damaged by a tree, and while on the ladder, he fell.  I believe he was approximately 70.  He lost balance and fell, most likely because of those wind gusts.  He later passed away in the hospital.  Why did it have to be him?  Sometimes it appears these things happen by random, to good people who didn’t deserve it.  I can’t question it much more because I can’t find the answer.  He will be remembered and missed, God rest his soul.

I truly will miss Bob’s smile and his hugs.